For as long as I have been a foodie, I have been a picky eater. The first 15 or so years of my life my favorite food were; french fries, peanut butter sandwich, chocolate sandwich, pasta and chicken. Even at McDonalds(in the 80’s) I would take all onion and pickles out of my hamburger and only ate ketchup on it, no mayonnaise or mustard, thank you.

Later on I started liking new things, especially when I moved to the Netherlands at 19 and I started cooking for myself. Now at 32 I eat almost anything although there are three things I really really don’t like: salmon, ham(and ham like meats except bacon) and eggs. Let me tell you it is not for lack of trying. I dislike salmon so much I can’t even stand the smell of it, ham is just yuck while bacon is walhalla. Make that bacon, avocado and hummus. You can wake me up anytime of the night for those three things.

And then there are eggs. I so want to like eggs. It would save me so much time. I could have a warm breakfast of scrambled eggs or an omelette, I could have eggs for dinner when I don’t have time to cook. All you egg eaters know what I’m talking about. Eggs are practical and time savers.

When I got good at cooking I decided that maybe if I made the eggs myself I would like it. All eggs I had tried up until then were just made with salt and peper, nothing fancy. One time I decided to make eggs sandwich. Omelette with cheese, sour cream and chives. I love the smell of slightly browned eggs but that liking did not pass over to taste. After a couple of tries I gave up, I did not really like it. I tried boiled eggs so I could eat the white and yellow separately and than maybe figure if it is the one or the other I don’t like about eggs. Still, no dice. I left the eggs for what it was. Only time I buy eggs is for baking a cake.

That was until now. Last week during a high tea they served a piece of quiche. I didn’t ask what was in it and just ate it, even ate the rest from my sister. I could taste a faint trace of eggs but it tasted good. Later I figured it must have been a frittata. And if I liked that frittata than by goodness I might have found my holy grail of eggs. I decided to make a frittata for dinner, with mushroom, leek, bacon and sharp cheddar.

I looked up a couple of recipes, read about how people make theirs and then made my own recipe. With good hope I went to the organic grocery store, because if I’m going to like eggs, only the best ingredients for the frittata. I got eggs, real butter, crème fraîche, flat leaf parsley, Irish sharp cheddar and the rest.

Heat the oven and broiler, cook everything in a cast iron skillet, add some more cheese on top, broil and done. 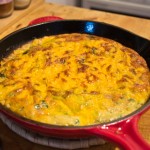 Perfectly out of the oven 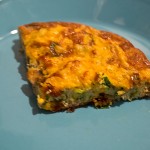 It turned out perfect and smelled heavenly. I cut out a piece and the first two bites where pretty good, filled with mushroom, bacon and cheese. Seriously this is cook for guests good. And then the taste of eggs started accumulating with each bite, by the last bite I was queasy. I was defeated by eggs. 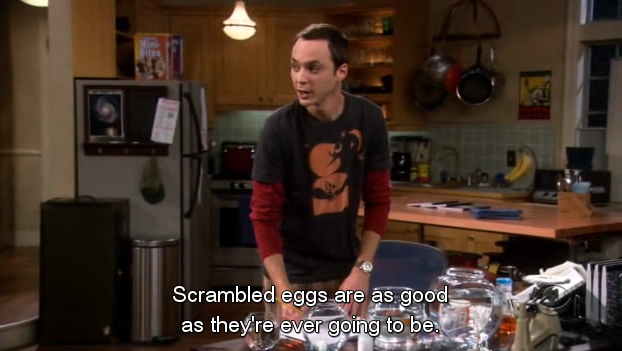 It took one glass of cranberry juice and one small piece of chocolate to erase the egg taste and a cup of camomile tea to stop feeling queasy.

I fought a hard foodie battle and now I must admit defeat. I just plain and simple do not like eggs. If you ever eat with me and I tell you I don’t like something, know that I tried, by goodness I did try. As for the rest of the frittata? Don’t fear, one lucky co-worker will get a treat from me tomorrow.