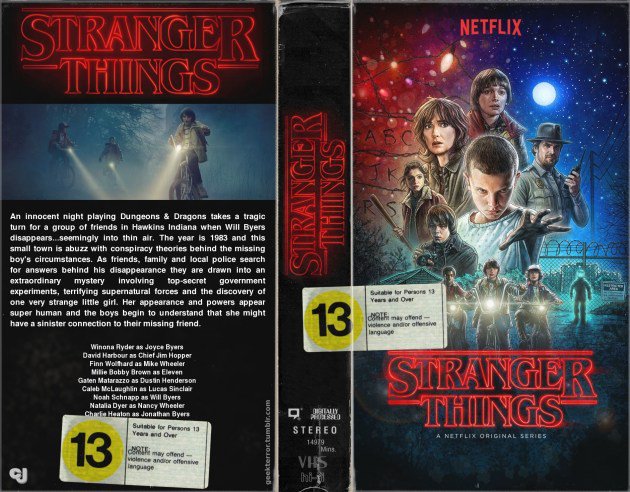 Netflix latest show, Stranger Things, is a classic 80’s throwback show. A mix of The Goonies and Poltergeist. The cinematography makes it seem it was even filmed in the 80’s. No fancy CGI effects or anything, at least not that it was obvious. From what I read even the sound is like you are watching it on a VHS tape. Remember video cassettes? That thing you needed to rewind before you could see the movie?

The peculiarity of the 80’s style intro screen at the beginning of each episode, in this modern age, is a breath of fresh air. The theme music is also pure vintage 80’s from what I have read.

Stranger Things has a strong cast starting with Winona Ryder, all grown up and mature. This is the show that can relaunch her career. The kids are excellent actors, nothing like these Disney or Nickelodeon kids that seem to be on a sugar high all day long.

Millie Bobby Brown 12 years old and already destined to be one of the greatest. She plays “Eleven” or “El” as Mike names her. She doesn’t have many lines but oh man she can act. Her facial expression tells every emotion. There are many adult actors in Hollywood that aren’t even half as good as her. She really brought that extra punch to Stranger Things.

The show is 8 episodes long, each episode is about 48 minutes including the intro. Every episode is so good that before I knew it I was done watching it in two days. Half away the season it was pass midnight and I was sitting in my dark living room with hands before my eyes watching the scary parts.

I also enjoyed the though Chief of Police, Hopper. No beating around the bush with him, he’ll just sucker punch someone out cold and move on to get things done. Modern cops on TV shows are all about the red tape and following protocols. Not in Hawkins, Indiana circa 1983.

Mornings are for coffee and contemplation.Chief Hopper, Stranger Things

Beside that the show is obviously set in the 80’s, details that we don’t stop to think about makes the show even greater. Like, when the kids have a pressing science question, no one whips out a smartphone to Google it. There isn’t any computer around let alone internet. Instead Dustin picks up the phone and calls his science teacher at 10 p.m. to ask a question and have him explain the answer to him to a T. When his teacher ask why he wants to know this info at night, Dustin answers: Fun.

I’ll stop here before I spoil you. If you love or even like 80’s classics you really should watch Stranger Things. Don’t skip it!