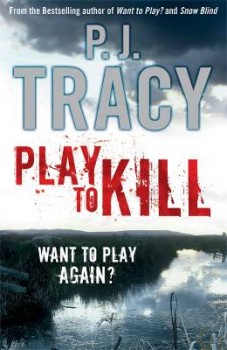 Play to Kill(UK title) by the mother daughter team, P.J. Tracy, is the latest book in their Monkeewrench series.

I read the first book of the series, Want to Play?(UK title) about four years ago. A plot involving cops, internet and hackers is just my kind of thing being the geek that I am. Set in the cold city of Minneapolis, Minnesota two homicide cops Leo Magozzi and Gino Rolseth are trying to solve a series of murder with the help of a group of very eccentric software developers/hackers. Since then three books has been released and now with Play to Kill going back full focus on the Monkeewrench gang and Magozzi with Rolseth.

It has been four years since the last book, Snow Blind, was released. So when I found out about Play to Kill I couldn’t wait. I re-read all previous four books with e exception of Dead Run to refresh on the characters.

As soon as I saw the book for sale before release date I bought it and of course read it in less then 24 hours.

A serial killer is terrifying enough, but when the murder videos begin showing up online – well, then it becomes an issue for computer analyst Grace MacBride and her eccentric crew of geniuses and mavericks. Recruited by the FBI, MacBride, along with Minneapolis cops Leo Magozzi and Gino Rolseth, work together to hunt down the killer. Using sophisticated tracking software, MacBride and her team scour the internet for signs of a possible attack, trying to weed out the staged videos from the real thing in hopes of finding a pattern.

But bodies keep turning up, and videos keep being posted, and the team is getting desperate to save lives. It’s not until they come across a sinister website that a real lead is discovered. And it takes them all the way to a shocking conclusion . . .

The book read just as good as the first one, keeping you on the edge constantly. But unlike the first book the story has to many holes in it. I’m always able to overlook things and just enjoy the book but in this case I felt let down with how many holes there where in the story.

For starters you should really read at least the first book before reading this one, otherwise the story will feel bland and superficial without the background knowledge of the characters. And some knowledge of internet most popular websites is also good to increase the thrill of the story.

The book is worth the read, it may not be my favorite one of the series, I always like the first books of any series the most. But if you are a fan of P.J. Tracy and with four years without a new release this one will read like a breeze.

If you haven’t read the book yet stop reading! The next part contains spoilers. You have been warned.

The psychology behind the internet

YouTube, MySpace and Facebook are keys to the plot line. With murder videos and messages being posted on these sites with no way to trace them back to the poster.

Internet is compared with the Roman Colosseum. Now a day you can see all kind of violence on the internet without restrictions. This free and easy exposure to violence is believed to make people less sensible and trigger people with killer instinct who otherwise wouldn’t act on their instincts.

The law on internet is such that it is not possible yet to target the criminals without forfeiting the freedom of knowledge and privacy.

Another topic touched in the book was how now a days everyone wants their 15 minutes of fame. Which is true, people will post anything on YouTube to get attention, reality show are only fueling this trend more. Heck even marriage wreckers give interviews requesting to speak to the wife of marriages they just ruined. Morals are far sought in a large group of the population now a days thanks to internet.

I’m someone who needs characters relationships to be part of a story to keep me interested. The Monkeewrench series created a set of very unique characters with the geeks, especially Grace MacBride who is so traumatized that she always wears riding boots, black clothes and carries two weapons. She lives in a fortress of a home with the latest in security. Then you have Leo Magozzi who had a bad marriage and divorce and not much luck in love.

Yet Grace and Magozzi connect with each other and he gets her to let go of some of her fears. But in Play to Kill we find out that not much has changed and that Garce still keeps him at bay, while Magozzi’s partner Rolseth keeps wishing Magozzi would forget about Grace and move on.

Then the FBI hating Grace somehow without any story line build up connects with FBI agent John Smit. We are led to believe it having to do with Grace fearing she will end up alone like John Smit. Even Magozzi sees there is something there but Roadrunner tells him it’s more of a daughter/father thing.

Meanwhile Maggozi meets FBI profiler Dr Chelsea Thomas, who has the looks, brains and everything. They meet up over work, they connect with each other and have a nice evening. I was hoping the would take this storyline and expand it more but it didn’t go farther.

At the end John Smit who has quit the Agency a few month before retirement asks Grace to join hin on his sailboat to sail around the Caribbean. She doesn’t agree nor deny him. So at the end when Magozzi went to her place I thought they would end in the same situation, so I was surprised Grace chose to join John Smith on the sailboat and leave Magozzi and her crew behind.

It is so unlike Grace MacBride to not only completely flip her lifestyle overnight but to join a FBI agent and leave her trusted circle of friends behind. And I actually felt for poor Leo, always hoping Grace would change and never imagining that a change would not include him.

I hope there will be a sixth book and that we find out more about what happens after with Leo and Grace. Also with the Monkeewrench team as Harley Davidson kept mentioning to John Smith that “someday” there would be a way to spy on all the foreign servers looking for criminals. Seemed like Harley was brewing onto something.

Basically to me it was an open end and I would like to see more to the series.

Shoot to Thrill US release.