It was five or six years ago that I bought Stieg Larsson’s Millennium Trilogy and read them all in less than two weeks. My first encounter with Scandinavian crime mystery that got me hooked, line and sinker. I remember how slow paced Larsson started ‘The Girl with the Dragon Tattoo’. He took his time to build the characters, the setting and the plot. I couldn’t stop reading until I finished all three books. Over 2000 pages.

Little by little he revealed the story. I’m guessing just like J.K. Rowling did with Harry Potter, when Stieg Larsson set out to write ‘The Girl with the Dragon Tattoo’ he probably already envisioned it to be more than one book and how the story would develop and eventually end. His books are well written, the characters are intricate and develop as the story moves along.

Larsson was also probably not thinking about monetary gain. He wrote the books in his free time next to his job as a journalist.
Now a day writers will start a book already envisioning it to be the first of many in the series with huge royalties and a movie deal. A passionate writer will just want to write their story and share it with the world and make a living if possible. That’s why I like discovering new books by unknown writers who don’t follow the what I will call, “The Hollywood Formula”, when writing.

Larsson passed away soon after having delivered his manuscripts to his Swedish publisher. He did not live to see them published and become bestsellers. His last will wasn’t witnessed and notarised and he wasn’t married to his long time partner, Eva Gabrielsson. Which meant that by default his father and brother who he wasn’t close to became owners of the publishing rights.

As the famous cliché goes: Money talks. Father and son who manage the Stieg Larsson’s estate commissioned the Swedish writer David Lagercrantz to write the the fourth book titled: The Girl in the Spider’s Web

When I saw that book 4 was released by a commissioned author, I did not really read about it but just went ahead and bought it. What I read here and there without going to deep, sounded positive.

As several articles have stated, we English readers wouldn’t notice much difference that it’s a different writer because we still have the translation barrier. Which is true but not completely. Story wise which I will go into soon and grammar wise, it was a huge difference.

I’m not a grammar expert, not even a bit. *Evident here while you are reading.*
On page 310 I came across an unforgivable wrong use of “affect”. Even I don’t get confused by them. As a paid translator the use of _effect_ and _affect_ should not be confusing and for the editor to miss it also? It really isn’t that hard.

“Can you imagine what an _affect_ that must have had on her?” -> wrong

“Can you imagine what an _effect_ that must have had on her?” -> correct

Besides that, I don’t read focussed on grammar, I suppose if I re-read the book slowly I would notice some of them, if there are more that is. It just shows lack of good editing and maybe a fast job to meet a deadline? I pulled out my old copies of the Millennium Trilogy to compare. All three of them and especially book 2 and 3 are almost double the content of book 4. My hardcover copy of ‘The Girl in the Spider’s Web’ is 431 pages in medium sized text. While my paperback copy of ‘The Girl who Kicked the Hornet’s Nest’, is 746 pages long in small text. 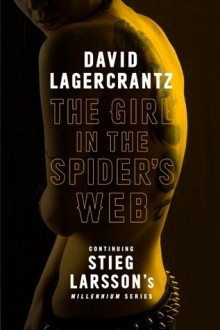 The Girl in the Spider’s Web
It being the fourth book you obviously would have to have read the previous three books. The first chapter introduces us to Frans Balder and his son August Balder who will be at the center of the story. In chapter two we meet Mikael Blomkvist again and from there on the story switches fast and often between many characters. I rather not go into details as to not spoil the story.

It’s not stated how much time has passed since the last book. In book 3 Lisbeth Salander is using a Palm Tungsten t3 which was released in 2003. In book 4 she uses a Blackphone which was released in June 2014. The Blackphone is made to be NSA proof, meaning no one can spy on you through the phone. If going by technology, 11 years have gone by. But if we go by the characters story and development when we meet them again, barely any time has passed at all. If you care about such details, book 4 will annoy you.

The story revolves around digital and corporate espionage, NSA, hacking and invasion of privacy. Which all comes back to Lisbeth Salander’s life. It lacked creativity in light of Edward Snowden’s story. As a matter of fact there was a scene in the book that seemed to come straight out of the documentary “Citizenfour”. Which made me wonder when the final draft of the book was done. Made me wonder how good the writing is in Swedish.

The book was fast paced, more than the first three books. If you like this kind of books it is a nice thrilling read for the weekend but it didn’t have the slow methodical build up of the first three books. The characters were kept true to form from what I remember but no development, changes or anything substantial was added. Lisbeth Salander was less careful than I remember her being, making some rookie mistakes in my opinion. But overall Lagercrantz did not delve deep in their psyche like Larsson did.

I was under the impression that the fourth book was build on what Larsson himself had written before he died, but once I got into the story I knew this was not Larsson. And indeed, his partner, Eva Gabrielsson, came into ownership of his computer which contained the drafts for the next books. So far Gabrielsson hasn’t done anything with those drafts.

To conclude, the book is a nice read, the plot and story is not the same level as Larsson’s. Lagercrantz wanted to tell too much in roughly 450 pages and like mentioned before, the NSA and hacker story is nothing new. This is the first time I read a book in which the characters were created by someone else than the writer. It felt like a violation of Larsson’s creation. Although if Gabrielsson ever releases a book based on the drafts she owns, I will read it.

When I bought ‘The Girl in the Spider’s Web’ I also bought ‘The Monogram Murders’ which is an Agatha Christie’s Poirot mystery written by commissioned author, Sophie Hannah. I’m a bit less enthusiastic now on how this book will turn out.