Robert Langdon is back and racing against time solving symbols to save his mentor and friend who has been brutally kidnapped by a fanatic who is totally of his rocker. and meanwhile we learn a whole lot about Washington D.C., makes me want to take at trip there soon. 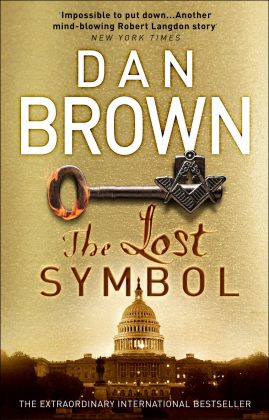 I don’t know if religious people or the Vatican will feel ‘attacked” for lack of better word. But reading The Lost Symbol I felt Dan Brown learned from his experience with the Da Vinci Code and made sure to to try keeping the facts strait although I’m sure people will question those facts. Sure the book is still a fiction story otherwise nobody would read it. But it is a fictional story based on some real facts.

But for pure reading pleasure this book is a home run, I couldn’t put it down. I spend two whole nights reading those 500 something pages. What makes it more fun to read is how the iPhone, BlackBerry, Twitter, Google all get mentions in the book.

Now if you haven’t read it yet and don’t want to be spoiled stop reading now.

The Lost symbol focuses on the Freemasonry and their secrets. Robert Langdon doesn’t consider the Freemasonry as anything as a threat or anything but basically just as a brotherhood who celebrate life by meditating on dead as I put it in my own words and understanding. All over the world there are brotherhoods and sisterhoods of the Masons and Eastern Star, even in Aruba for example. I’m pretty sure their rituals aren’t anything at all as the one described in the book. On Aruba they mostly focus on charity work, e.g. donating money if I’m not mistaken.

In the book the Masons are guarding an old secret believing to contain The Ancient Mystery. As the story in the book goes The Ancient Mysteries will bring enlightenment and understanding to the one to find it. Now off course this is the fiction part of the story..partially.

For a couple of years already I have been reading a lot of new age books. The Lost Symbol isn’t all fiction when it talks about that we humans are not consciously aware, if we are honest we live in a materialistic age where money is the main factor to happiness or what we believe is happiness. A lot of books have treated the topic of humans becoming enlightened and that our minds are real powerful and that we barely use it to the capacity that is possible.

In the first chapters when Noetics Science is being explained I could already see where the book was going, page after page I kept waiting for the ball to drop and finally on page 408(UK Edition) it is revealed “December 21 2012”. According to Mayan Calendar that is the day that a shift will happen. A lot of scholars, amateurs, basically everybody have their opinion on what the Mayan predicted that will happen. In all cultures this date comes back. Most people believe it will be the end of the world, others that it will be a cosmology happening and others believe that the humans will become enlighten and aware of the meaning of life.

As for an end of world, Armageddon or Apocalypse I don’t believe that will happen. I mean have you looked at the world recently? Does it look like we need supernatural help to finish off the world? And Apocalypse doesn’t mean the end of anything and I quote Wikipedia:

Apocalypse (Greek: Ἀποκάλυψις Apokálypsis; “lifting of the veil” or “revelation”)

Ironically enough in “The Lost Symbol” the Masons are protecting what they call “The lost word” and I was baffled that the lost word stands for nothing less and more then the plain old Bible, the Torah, etc.

If one thing is true in this world is how badly the Bible has been miss used and miss understood. People have done atrocities during centuries in the name of the Bible or it’s equals. People always forget that ancient scriptures shouldn’t be taken literal.

In any case this book is still just that a fiction book. I just found intriguing that a lot of actual subjects are used, especially as to the spiritual world. We are in an age that a lot of people don’t or stopped believing that there is more to life then we are aware of. And it brings on questions that has kept us busy for centuries; Is there life after dead? Do we have souls?

We all have opinions and I guess this book will bring on some discussions. But I guess the Vatican can’t be mad this time as with The Da Vinci Code, because it just made the Bible interesting to read.

But for one thing I’m really wondering what, if anything happens at all in year 2012. But I’m pretty sure it won’t be the end of the world. I leave you with a few Wikipedia links:

It is nice to have some topics to theorize over and read more about, keeps ones mind busy.