Regarded as “the” summer read and highly anticipated, The Passage by Justin Cronin is yet another vampire story. But don’t confuse it with our hero vampire Edward Cullen. 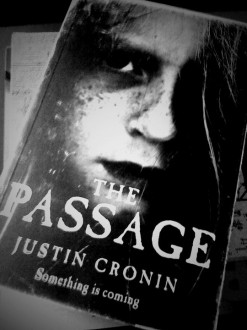 Set in the not so distance future of 2014 we follow an U.S. Army secret test with a virus, death row inmates and a six year old girl. Soon we are taken 93 years later in a post apocalyptic world where the remaining humans live day by day while fighting of the ‘virals’.

The Passage is the first of what will be a trilogy, 700 something pages long I have to say this book felt like my personal Mount Everest.

When a book is much hyped like this one I expect it to read fast, taking me at least a week at most. A good example is the Millennium Trilogy which I read in a week and a half. Justin Cronin really takes his time to develop characters, detailing environments, relationships and so on. It’s not just a thriller and horror story, but a it has a palpable emotional storyline embedded between all of it. If you like authors like Stephen King and can handle a trilogy the size of Lord of the Rings you might like this book.

I struggled with the first 300 to 400 pages which where mostly settings of plot-lines and characters. After The Road and The Book of Eli the whole deserted towns and cities, everyone long dead gets kinda routine. It’s only after I finally got in the mind set of the characters who know almost nothing about the beginning of it all that I got pulled in the story, rooting for them trying to save humanity.

The book gets a 3 out of 5 stars from me. I admit this is not really my kind of fare but I managed to read it till the end and I would like to read the next book. But I don’t feel like the book lived up to all the hype it got.

If you read the book there will be a part about The Gulf of Mexico which will be so ironic you won’t even laugh.